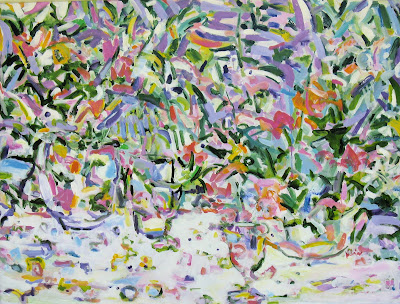 
Peyton Klein lived and breathed art.  It was vital to her life.  Her smooth and sultry Mississippi roots were evident in her spontaneous and exuberent coloristic style.  She began her study of art in the 50's under the tutelage of Jim Yeatts.  Once she started painting there was no stopping her.  Her work was always fresh and  free with a love for life.  Each painting served as a rebirthing process for her.  She gave freely of herself and her ideas and was a pillar of the art community in Roanoke.  In the critique or workshop process she was always willing to encourage her students and fellow artists with thoughtful constructive criticism.  She served as the art critic for the Roanoke Times for many years, she taught at Virginia Western Community College and the Roanoke Fine  Arts Center, and she was one of the co-founders of the Studio School.   She passed on in May of 2005.
Posted by marcia mcdade at 12:24 PM No comments:

Victor Huggins--Inspired by the Virginia Landscape 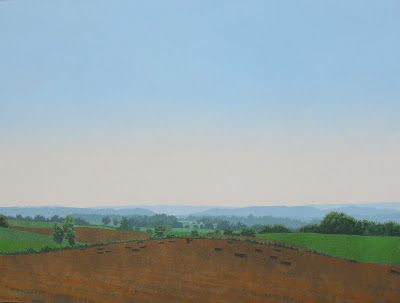 This painting was a rare departure from his well known style of stained and lamimated raised relief canvas shapes.  This work exhibits a more traditional approach but maintains the clean crisp atmosphere that is present in his more typical style.

1937-2007
Professor at Virginia Tech for 25 Years
Bachelors and Masters Degrees from the University of North Carolina, Chapel Hill
His Paintings are in more than 400 Collections including the Smithsonian Institute
He always inspired his students and fellow artist to think creatively and he made great strides in expanding the art curriculum at Virginia Tech.
His influence was felt in the art community far beyond Southwest Virginia.
Posted by marcia mcdade at 6:48 PM 1 comment: 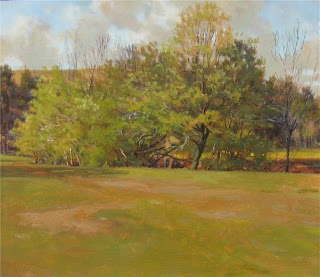 Selected Shows
Cudahy's Gallery, Callin McJunkin Gallery, Sweet Briar College, Peninsula Fine Arts Center, Greenville Museum of Fine Art, Chrysler Museum, McKissick Museum University of SC Columbia SC, Smoyer Gallery Roanoke College, Appalachain State University Boone NC, Virginia Historical Society Richmond VA
"Ron Boehmer paints the quiet moments. His subtle and meditative landscapes depict not so much documentation of place, as the spirituality behind and in and around the images. Ordinary byways, river and creek beds, backwoods, and open meadows are interpreted without fanfare, but with a quiet dignity that suggests the eternity present in every moment.
Though deeply influenced by such 19th century landscape painters as David Johnson, Russell Smith and Theodore Robinson, Boehmer's work also reflects the influence of his teacher and this century's noted dean of American landscape painting, Neil Welliver. Boehmer's work manifests the dual influences of the 19th century approach to the spirituality and grandeur of nature, and respect for an agrarian lifestyle and Welliver's 20th c. innovations. Welliver's work, influenced by such important 20th c. painters as Jackson Pollack and Willem de Kooning, introduced new elements of abstraction and abstract expressionism into traditional American landscape painting.
Boehmer's paintings offer a unique synthesis of these diverse influences, with particular interest in capturing light, attendant atmospheric conditions, and in describing the abstract patterning inherent in nature. The inviting interior woodlands, open meadows, farmland and cityscapes in his adopted home in the Virginias are the subject of Boehmer's most recent explorations.
Boehmer has taught painting in Virginia for more than 20 years and has exhibited extensively in Virginia and the Mid-Atlantic and Southeastern regions. Since 1984, he has participated in over 50 juried shows and exhibitions, receiving more than 40 awards in painting and drawing. Boehmer's more recent noteworthy exhibitions include "Myth, Memory, and Imagination: Selections from the Julia J. Norrell Collection" at the McKissick Museum, University of South Carolina in Columbia, which traveled to the North Dakota Museum of Art, and The Arkansas Art Center in Little Rock, and "The Virginia Landscape", an exhibition at the Virginia Historical Society surveying more than 200 years of artistic interpretation of the Virginia landscape.
His works are in numerous private and corporate collections, including Hollins University, Nations Bank, the University of Virginia Medical Center, and the United States Embassy Saudi Arabia."
quote from                                                                                                                  Callen McJunkin Art Gallery

Posted by marcia mcdade at 10:15 AM No comments:

This Oil Painting is a rare find.
The location is Amherst County, Virginia.
The surface quality of the paint is flawless.
A landscape painting of this size and quality with the narrative element is unique.
This work is a contemporary masterpiece, classic and traditional.

"The intention in all my work is to address the formal issues of painting, specifically, and the visual language paradigm, generally. In other words, the effort is to explore and understand or "realize the nature of painting." At the same time I seek to record a specific visual and "feeling" response to the natural world; to light, to atmosphere, space, color, shape, form, and the symbolic, unique, or archetypal character of the subject matter. My paintings are intended to be expressions of the nature of Nature, the nature of painting, the nature of "sense of place and time," and the nature of the experience of "Being."
In general I prefer to work from direct observation. With regard to landscape this means working on location. I will usually try to finish each plein air painting in one session, although occasionally a painting will require two or more sessions on-site. These are usually oils on paper, or on canvas or masonite. While these plein air paintings are used as the source material for larger studio paintings, they are intended to be complete statements rather than "studies."
In addition to the plein air work I make larger scale paintings in the studio, based upon the on-site paintings and studies, but dependent more on working from memory of the plein air painting experience than direct blow-up of the smaller works. The studio paintings often involve a more reflective and analytical approach to the compositions than I have time for in the field studies. The paint surface and brushstroke elements also often differ as the larger works involve layering and "building-in" color in a manner that is somewhat different than in the more spontaneous plein air work."
signature mark 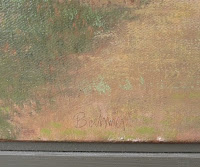 Posted by marcia mcdade at 8:55 PM No comments: 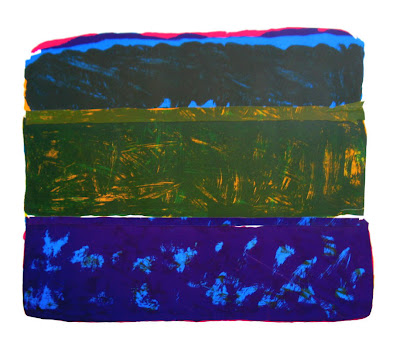 This work exhibits shapes which are not bound by the rigid format of most printing techniques.  Textures,  brushwork and transparent glazing are layered to create a fluid style which is more characteristic of painting.  Ida Kohlmeyer was a forunner in this experimental approach to silk-screen printmaking.   The silk-screen is a medium which was developed largely in the 20th Century and came to the forefront in the pop culture of the 60's and 70's.  In her early prints one sees the combination of early stenciling techniques,  with loose and painterly brush work, transparent glazing  and the technological advancements of light sensitive photographic emulsion that incorporate photography into the medium.

Well known for her drawing, painting, printmaking and sculpture
Studied under Hans Hoffman
Close friend of Mark Rothko
Strongly influenced by the Abstract Expressionism
Her style is noted for the strong fluid lines and biomorphic shapes

Examine these three prints and you can understand a bit about silkscreen printing.
The technique employs the use of clear acetate and photosensitive emulsion to form stencils.  Howard has made his mark with an opaque ink on the clear acetate.  The clear acetate is then applied to the back of a silkscreen frame which has been stretched with a polyester fabric.  The fabric is coated with a photo sensitive emulsion.   The clear acetate with the markings is sandwiched between the back of the screen which is covered in the photo sensitive emulsion and a light table.  This bundle (silkscreen+acetate) is  exposed to light on a specially designed light table for a period of time and the negative of the marks is hardened and sticks in the holes of the fabric on the screen.  The areas that are marked are not exposed to the light and those shapes wash out of the screen and open areas are left.  These open areas form the stencil.  Ink is applied to the top of the silkscreen and the ink is force through the holes in the polyester (silk).  Pressure is applied through a rubber blade (the squeegee).  The ink is applied to white paper to form the design.  The paper dries and the print is finished.  New stencils are made for each color of the design.  Negatives can be formed from the existing acetates photomechanically.  Here you see the products of two stencils to form three variations of a design.  Stencils can be reused with new new colors. 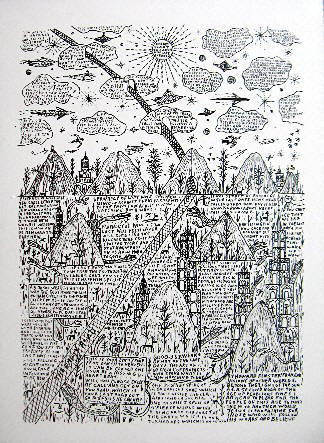 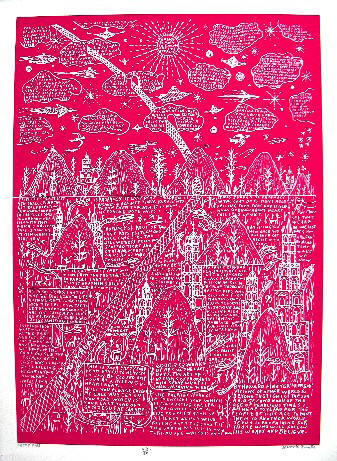 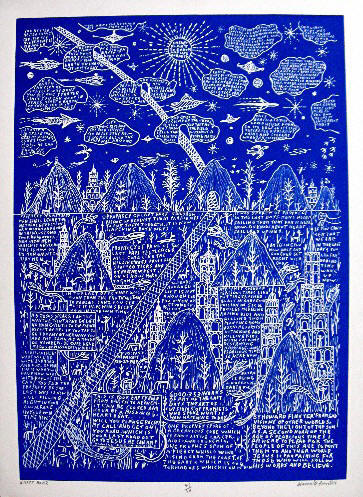 The Empty Road one color stencil
same as the red stencil above
printed alone without the black
#47/50
Posted by marcia mcdade at 9:28 AM 1 comment:

marcia mcdade
Cedar Grove, NC, United States
Over the years my husband and I have operated both retail and wholesale fine art galleries. We love art and have assembled a nice collection of works through the contacts we have made in art and business. Contact us if you have any questions and let us know what you think. wdmcmann@gmail.com mcdade.marcia@gmail.com